With schools moving to distance learning, and the 2020 baseball season officially canceled, we are spotlighting each of our six Saxon Baseball seniors. It’s no replacement for a season full of memories, a senior night, and playoff games, but in this new COVID-19 world in which we live, any celebration we can hold is worth having!

Our sixth and final senior is Greyson Hanowell. 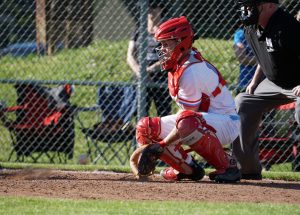 Favorite Saxon Baseball Memory: My favorite memory was the playoff game against West Linn when I hit the three run oppo dong and Ryan and I were clicking throwing heat by everybody with the Yankees scouts there.

What I’ll miss most about Saxon Baseball: The thing I’ll miss the most is the atmosphere of high school baseball and playing in front of your friends and family with your brothers.

Something you learned as a Saxon Baseball player: Something I learned while being a Saxon was that everyone has something to offer even if you don’t think you do. Find what you’re good at and bring it to the table. Invest in your family.

Who would you like to thank? First and foremost I want to give my biggest thanks to my grandfather, Ron Caligure, for making me the baseball player that I am today. Of all the people in my life I have spent the most time with this man and am thankful for everything he has poured into me. Thank you to my mom for supporting me in what I love and my fan base of siblings and grandma. I’d like to thank my South coaches for investing in me and providing countless resources for my development.

What’s your best advice to Saxon Baseball players: High school goes faster than you think. This would be one occasion where I would say do more and think less because we can all think about what we want to do but it’s another think to go out and do it. Be crazy and have no regrets.

What do you plan to do next? I plan on working my butt off until this stupid corona thing gets over, then I’ll up and play college baseball somewhere.

Parting thoughts: I had one stolen bag this year and it was in our intersquad so I’m pretty pumped about that.

A Word from Coach Price:

This is a particularly special group of seniors for me on a personal level, as I started coaching at South the same time they started attending South. So this is my first set of players who were stuck with me for all four years of their high school baseball career.

Greyson joined us after winning conference player of the year honors as a freshman at Salem Academy. He made an immediate impact on all of us, not only for his on-field performance, but because of who he is as a person. He’s a leader, a great teammate, and an amazing person. His influence at South Salem High School reached far beyond the baseball program.

His name was often the first on any staff member’s mind when something important needed to get done. Looking for someone to be the Saxon Man? Greyson. Need someone to be in charge of a delivery while you’re teaching class? Greyson. Trying to find a high quality person to join the Unified PE class? Greyson. The dude is a natural at looking people in the eyes and making them feel important, and it’s genuine.

He’s going to move on to do some profound things on the baseball field at the next level. He can catch, throw runners out, lead a pitching staff, and hit for contact and power. He’s a clutch performer, hitting three homeruns in the playoffs over the past two years as we reached the OSAA State Semifinals. He’s not afraid to catch a throw up the third baseline, turn into the face of danger, and take on a runner going full speed, as he did against Jesuit in 2019.

But he’s also going to move on to be an amazing husband and father. And I know I’ve written that quite a bit about this group of seniors, but it’s true. I am so proud of the man Greyson was when he arrived at South Salem, the man he became while he was here, and the man he’ll be 10, 20, 30 years from now.

Thanks to all six of our seniors, their families and friends, and everyone who played a role in their lives, for a wonderful time. I’ve appreciated each and every one of you, and you’ve impacted me far more than you can imagine.

No Events This Week

Events are added by athletic staff.
View All Events