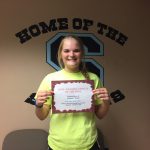 Bridgette O’Connor – Bridgette had 18 kills on 32 attacks for a .406 hitting percentage, along with 2 aces to help lead the Saxons to a victory over West Albany for the first time since they joined the GVC.   Boys Soccer – Anthony Richard Bassett. Goalkeeper ARB made a spectacular “game-saving” save early in

No Events This Week

Events are added by athletic staff.
View All Events